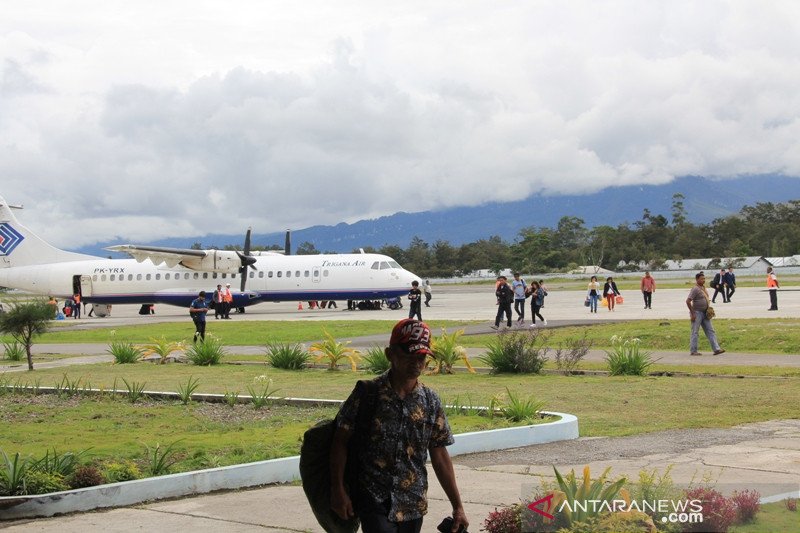 WARTABARU.COM – Transportation Minister Budi Karya Sumadi has ensured that Wamena Airport in Jayawijaya District, Papua Province, is still safe for aviation activities since no airport facilities had borne the brunt of the September-23 lethal rioting.

"The Wamena Airport did not incur any damage, and it remains safe," Sumadi informed journalists in Jakarta on Friday.

Wamena's rioting, which had taken a deadly turn, erupted during a rally that the native Papuan students had staged on September 23. A total of 30 people, including a medical doctor, lost their lives, while no less than 77 others got injured.

The deceased and injured included non-native Papuans, who were not spared by the rioters that attacked them with machetes and arrows.

The riot that had compelled several thousand residents, mostly non-native Papuans, to take refuge also led to the temporary grounding of flight operations by the Wamena Airport authority.

Head of the 10th Regional Airport Authority Usman Effendi stated that the decision to temporarily ground flight operations was a precautionary measure taken to handle the impact of rioting.

However, the airport operations again resumed to transport refugees keen on leaving Wamena and to fly medical workers for the city to offer assistance to their colleagues at the Wamena public hospital.

In connection with the Wamena rioting, National Police spokesman Brig. Gen. Dedi Prasetyo pointed out that the masterminds behind this deadly riot are allegedly members of the West Papua National Committee (KNPB).

On the day the violent rally took place, Commander of the 1702/Jayawijaya District Military Command, Lt Col Candra Dianto had remarked that a gun battle also broke out between the Indonesian security personnel and an armed separatist group around the Pasar Baru area.

The armed rebels might have employed three guns and rifles. Currently, 1,300 military and police personnel are stationed in Jayawijaya District. In the face of the tragic incident of a medical doctor falling victim to Wamena's rioting, the Indonesian Doctors Association (IDI) has urged security agencies and other related stakeholders, as well as community members to ensure the safety and security of working paramedics across Papua Province.

Their safety and security is of paramount significance to facilitate optimal and effective services by all paramedics, including doctors, Chairman of the IDI-Papua Chapter Dr Donald Aronggear stated.

Aronggear noted that all paramedics in Papua were mourning the death of 53-year-old Doctor Soeko Marsetiyo in Wamena's deadly rioting that had erupted early this week.

Marsetiyo's death spread panic among several doctors, currently working at the Wamena public hospital, resulting in them requesting to leave the hospital, which was comprehensible, as doctors too are humans seeking a sense of security, he added.