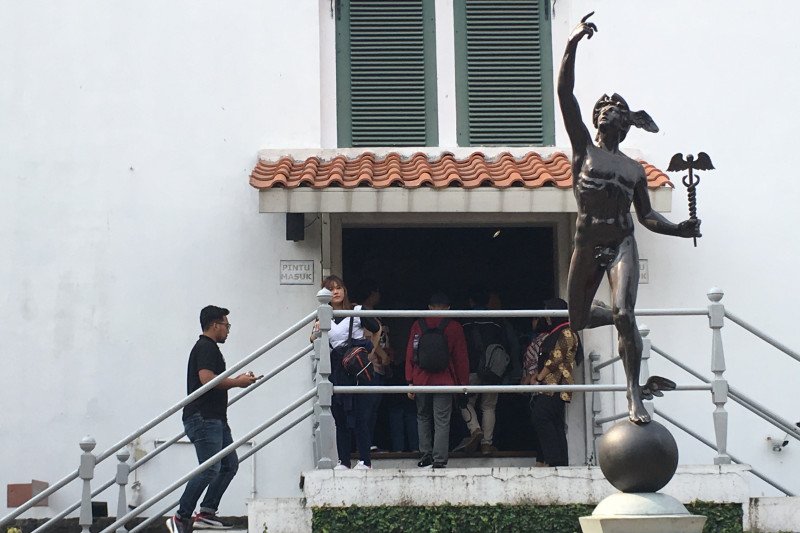 WARTABARU.COM – A Hermes statue welcomes everyone to the courtyard situated in the middle of a neoclassical structure of the Jakarta History Museum, its metallic black color contrasting with the building painted in white that stands behind.

The figure, which is well-known as a god for traders, pedestrians, and athletes in Greek mythology, is slightly hard to relate to with the museum. Yet, back in the past, this was indeed a part of Batavia's (the name of old Jakarta) history.

"This bronze Hermes statue was placed at Harmoni Bridge in the early 20th century under the ruling of Dutch East Indies, and later moved here after vandalism in 1999," states the engraving below the statue in its historical note.

Today the Hermes statue represents the past of Jakarta. This is just one single monument. Imagine how many other things inside the museum could have brought people back to the Batavian era, and even further.

The Jakarta History Museum is situated at the center of Kota Tua Jakarta (Jakarta's Old Town), about eight kilometers from the heart of the metropolis.

As the main building in the area, its structure is history itself.

The building has been standing for over three centuries, which at the very beginning, was purported to be the City Hall of Batavia, the Stadhuis.

However, as the years, decades, and ages passed, it was used for many other purposes such as the West-Java Provincial Governor’s Office and the Japanese logistics office.

March 30, 1974, was the day Jakarta's Governor Ali Sadikin inaugurated the building which is the current museum and is known as Museum Fatahillah, since it is the main building in Fatahillah Square.

Display rooms on the first floor inside the structure could tell people enough about Jakarta’s timeline. Starting from the prehistorical collections in 3500 BC, it ended with a mural art from the contemporary era.

On the second floor, there were themed display rooms from “Kalapa-Jakarta” as the era of Jakarta became a foreigners’ entrance port of Sunda Kelapa, to “Indische Life” when natives lived under the regime of VOC.

Tom, a Dutch tourist, was there one Friday in late September.

“It has a history about The Netherlands, so I want to know how they behaved in the past. Well, everything I read is new,” Tom said as he browsed through the VOC’s infographic installed on the wall.

Besides the historical knowledge he was reading for the first time, Tom also sent his positive comments for the museum’s collections on display.

“I like the way everything is clear, all beautiful pieces, no broken collections,” he said.

Exploring the Hermes and the collections have to be completed with a visit to the museum's underground prisons.

Five cells were provided under the building to accommodate male prisoners who could be Batavia’s natives, Chinese, or Arabs during the Dutch East Indies rule. One cell was specifically for females.

However, the past does not stop at Jakarta History Museum, since there are some other museums within the area of Fatahillah Square.

Wayang Museum and the Museum of Fine Art and Ceramics also present art from the past.

Wayang is the common name of Indonesia’s traditional puppetry. The museum displays various wayang from across the nation, as such Sumatera’s gundala-gundala puppets, Betawi’s wayang, and Javanese’s wayang as it was the most common.

Puppetry from other countries is there as well, namely from India, France, Russia, China, and England. It is the same concept, but the puppets have a different appearance.

When visitors set foot inside Wayang Museum building, which used to be a church, the air inside welcomes you with the musty smell of the old, as if the past pervades the air.

Whoever stands among the puppets displayed inside the transparent boxes may feel as if they are all alive. The feeling is more intense as traditional Javanese musical instruments of gamelan are there as well.

Various traditional masks such as those from Cirebon and Bali hang on the wall before the exit.

Ipah, a visitor from Cilacap, Central Java, was both, amused and amazed looking at Wayang Museum’s collections.

“When I was in school, I thought there were only Javanese wayangs. But today, I found out that I was wrong. All regions in Indonesia have their own, and foreign countries too,” Ipah said.

Exactly across the Wayang Museum, a more spacious building of the Museum of Fine Art and Ceramic stands firm. It used to be the office of Batavia’s Judicial Council back in the 1800s.

This museum displays collections of paintings, sculptures, and ceramics described as the historical line of Indonesia’s fine art from the 19th century until now.

Pottery collections are mainly from the Chinese who came to the Archipelago (ancient Indonesia) ages ago.

Somehow, these three museums have provided historical facts on each item displayed – written knowledge, the art of wayang, and ceramics. And although even as time moves forward, the past will always remain in there.