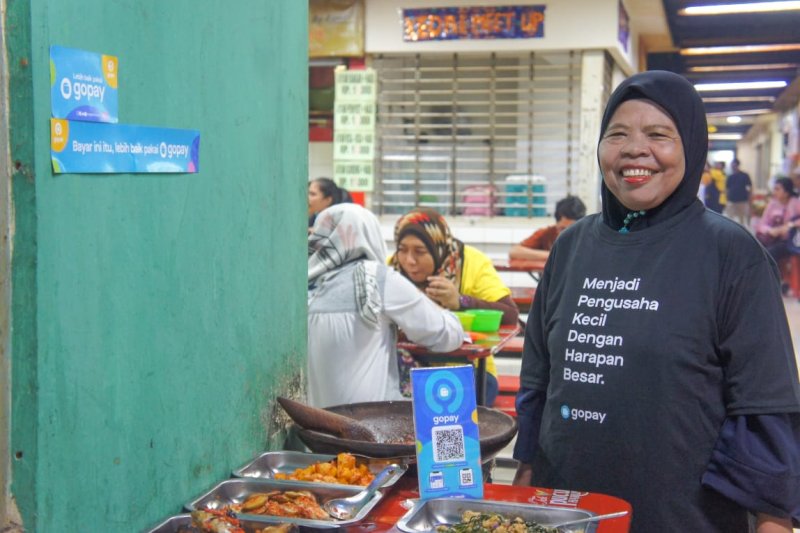 One of the traders who uses GoPay in Jakarta.

WARTABARU.COM – Gojek, Southeast Asia’s leading on-demand technology platform, once again made it to the annual Fortune "Change the World" list, a recognition given to companies that create a wider socio-economic impact.

“We are humbled to be recognized by Fortune once again for accomplishing what we have set out to achieve from day one, empowering lives and solving problems through technology," Global CEO and Founder of Gojek, Nadiem Makarim, said in a statement in Jakarta on Monday.

This year, Makarim noted, Gojek ranked 11th out of 52 international organizations, making a leap from its 17th position in 2017.

"Gojek is also the only Southeast Asian company to have received this internationally recognized accolade twice," he said.

Gojek is the only Southeast Asian company to make it to this year’s Fortune “Change the World” list, recognized for GoPay’s innovation in accelerating financial inclusion in Indonesia, Makarim said.

He said that the prominent global list highlights how GoPay, Gojek’s digital payments platform, has helped drive Indonesia’s digital economy by expanding financial access for millions in Indonesia, where 64 percent of the population is "unbanked".

According to Fortune's official statement, in 2018, the total purchase of products and services via GoPay reached more than six million US dollars, including providing assistance and loan facilities to around 130,000 micro-entrepreneurs.

GoPay CEO, Aldi Haryopratomo, also said that GoPay is the largest consumer digital payments platform in Indonesia and more than 90 percent of GoPay merchants are micro, small, and medium enterprises.