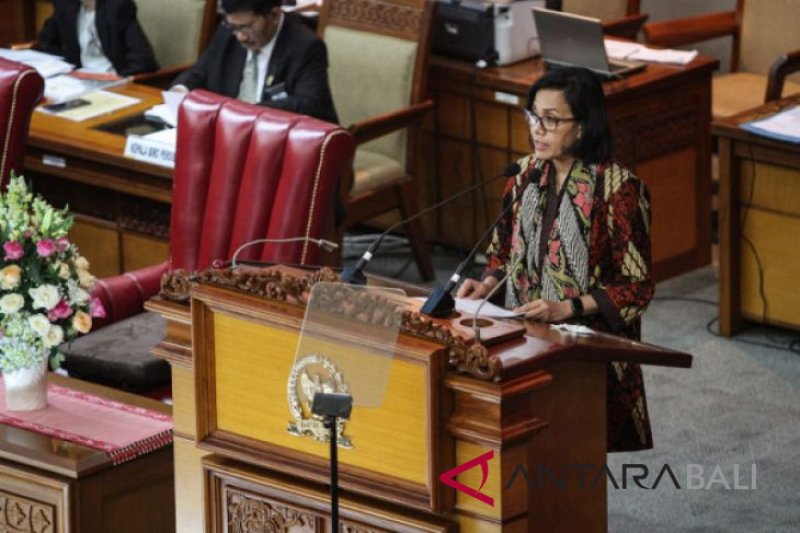 Finance Minister Sri Mulyani Indrawati conveyed the view of the government at the House of Representatives plenary session in Jakarta on Friday (18/5/2018), on the macroeconomic framework and the principal of the fiscal policy of the Draft State Revenue and Expenditure Budget (RAPBN) 2019. (ANTARA PHOTO/Dhemas Reviyanto)

WARTABARU.COM – At the beginning of the first term of his presidency in 2014, Joko Widodo (Jokowi) had expressed his ambition to develop Indonesia into a maritime axis and revive the country's past maritime glory.

One of the keys to realizing this ambition is by building competent and professional human resources in the maritime field.

And now, as his first presidential term draws to a close, Jokowi, who has been reelected for the 2019-2024 period in the 2019 Presidential Election, unveiled his vision to make Indonesia a developed country and one of the world’s economic powers, by relying on the quality of human resources and mobilization of its economic resources.

“We are the fourth largest population in the world. Most of them are young people. Our middle class population grows rapidly,” the President said while delivering his address on the Government Statement on the Bill in the State Budget for the 2020 Fiscal Year and Its Financial Note before the Plenary Session of the House of Representatives (DPR) at the Parliament Building, August 16, 2019, a day prior to the Indonesian National Day.

Indonesia currently has a population with a productive age constituting 68 percent of the total population of 267 million.

The government's determination to make Indonesia a developed nation reflects in the 2020 fiscal policy themed “A State Budget to Accelerate Competitiveness through Innovation and Improved Quality of Human Resources”.

"By focusing on improving the quality of human resources, Indonesia can immediately realize its vision of becoming a developed country," Jokowi assured.

In the 2020 Bill in the State Budget, the State Expenditure has been projected at Rp2,528.8 trillion or about 14.5 percent of GDP, to be utilized among other things for improving human resource quality and continuing social protection programs to meet demographic challenges.

Earlier, at an event called Indonesian Vision held on July 15, 2019, Jokowi expounded his vision and mission which he said was responding to global challenges that are complex, evolving and full of uncertainties and risks. Human resources development is one of the five priority programs to be implemented during the second term, in addition to infrastructure development and investment, among others.

The third project will involve the development of a science technopark by optimizing the Triple Helix interactions of four major universities. The project will benefit from Rp2.8 trillion in funding. The Technology Research and Higher Education Ministry, the University of Indonesia (UI), the Bandung Institute of Technology (ITB), the University of Gadjah Mada (UGM), and the Bogor Institute of Agriculture will implement the project.

The minister believed that the Industry 4.0 era cannot be ushered in by conducting business as usual. It needs a breakthrough in learning and innovative thinking. (INE)